Beyond the granaries on the right is one of a new generation of toilets, which is reuted to have cost RMB 1,000,000 to build when it was opened in 2018. Beyond, are some derelict factories with Maoist Cultural Revolutionary slogans still painted on the walls in red – “Raise up Mao Ze-dong wisdom, the Great Red flag move forward!”

Across the road turning right is a pavilion on the left. This honours some old folk of the village and has calligraphy by General Fang Zhen-wu, who was a General with the KMT.

Her grandfather, Fang Zhen-wu, was born in Anhui Province. He rose to become a Kuomintang general but fell out with Chiang Kai-shek in 1929 who at that time was still trying to reach an accommodation with the Japanese. He helped organize the Chahar People’s anti -Japanese army, and fought against the Japanese invasion. He retreated to Hong Kong. However, he left Hong Kong when the Japanese occupied it in December 1941. He was assassinated near Zhongshan by Kuomintang agents on his way escaping to Guangdong with crowds of refugees in December 1941. The pavilion has ancestral photos in porcelain and his calligraphy. It is covered in terrazzo. 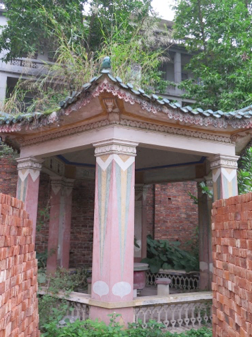 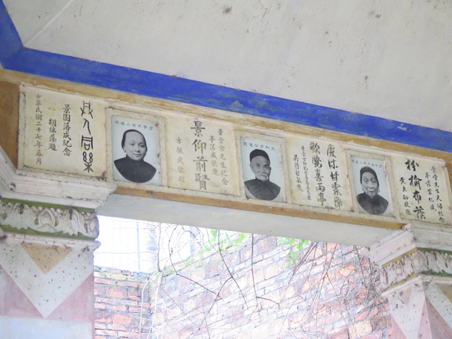 Behind the pavilion is a fine mansion, but between the mansion and the pavilion an intrusive red brick wall has been built rather losing the harmony of the setting.

The neighbourhood is a Fang stronghold. Rong Gui Fang is nearby and belongs to the Fangs. The village behind the Old Post office hostel is a Fang village and Zili is not far away and is a Fang cluster. Sangyuan Village is also Fang. Guarding all these villages is the Fang Watchtower, visible from the roof of the hostel.

From the little bridge there is a walking path to the left or a cycling path straight ahead, both reaching Rong Gui Fang. Along the footpath are two men who live singly on boats or in a new metal shed provided by the local government. A little further along an elderly lady and her daughter live comfortably on a boat that was refurbished in 2014. These people belong to the Tsui clan and their ancestors come from Chikan. The ladies take a boat along the river to go fishing each day and if they have surplus, sometimes supply the Tangkou community. The old wooded bridge to Rong Gui Fong has now gone, replaced by a new stone bridge just beyond, built (2016 or so) as part of a project to rejuvenate Rong Gui Fang with holiday villas but the project was abandoned.