The watchtower commands a fine view over lands and villages occupied by the Fang Clan. It can be seen from the roof of the hostel and is an easy 15 minutes walk. From the hostel you can follow the road towards the garage and turn right up through some woods till a clearing with a banana plantation. Alternatively, there is a route through the Fang village behind the hostel. Cross the graveyard to reach the tower. Cycling, it may be best to approach from the road to Zili as the access up through the graveyard is then shorter. 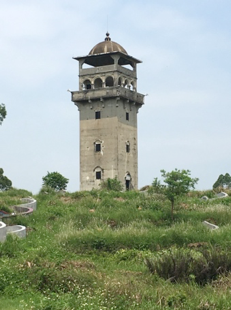 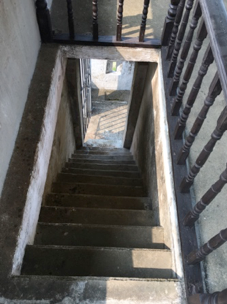 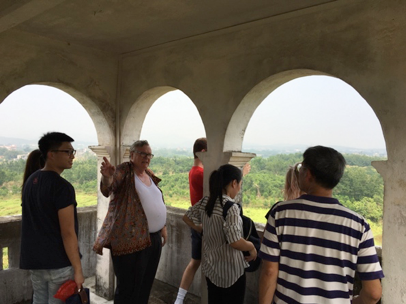 The Fang Clan Watch Tower is built about a kilometre south of Zili Village on top of a hill. It was built communally by Zili Village and several other Fang clan villages in the vicinity in the 9th Year of the Republic (1920). These various villages all donated to the construction.

The tower had open country on all sides and thus, had superb sight-lines. It could raise an alarm for even the more distant of the Fang clan villages. Each village contributed men to a militia group which garrisoned the tower, acting as a watch in rotation. They controlled anyone coming into the Fang clan village area along the major routes. The hill on which it stands is also used as the burial ground for the Fang clan villages. It was believed also that the dead ancestors might assist in preserving the peace and security of the area.

The door of the tower faces north-east. The reinforced concrete tower concrete has five storeys and is nearly 19 m. high. It occupies a floor plan of 20.25 sq. m. with a total built area of 110.77 square metres.

There are few windows in the lower floors, and they have stout lockable metal shutters. It is built to a slender square plan with twelve buttresses and rises to an arched verandah, supported on columns at the roof-terrace with a domed pavilion on top. The whole tower has a noble, classic beauty and forms an elegant feature of the landscape. The top floor features a Byzantine- style pavilion. It is still well preserved.

In the tower there were guns bought by members of the Fang clan living overseas, an electric generator, a searchlight, and a siren. Whenever bandits came the searchlight on the top floor would be turned on to show where the bandits were and from which direction they were coming. Meanwhile the siren would be sounded; the villagers could gather to drive the bandits away or force them to surrender. In one corner is a speaking tube so that occupants could communicate without having to go up or down the tower.

The Fang Clan Watchtower tells of a period in history when members of the Fang clan greatly feared bandits coming into the area, particularly from the north. They hoped to prepare themselves to resist them and so built this tower as part of their defences.

1. The view from the hostel roof to the Fang Watchtower at the left on the skyline.

2. The path from the Fang Watchtower leads towards the Tangkou Hostel

3. View from inside the Fong Watchtower.

Panoramic view from the Fang Watchtower.