From the Tangkou hostel it is an easy 20 mins. walk or a short cycle ride to the beautiful but almost deserted village of Rong Gui Fang. We pass the world Granary site, the General Fang Pavilion and a lotus pond. At the first bridge we can either go straight ahead or we can turn left and follow alongside the waterway, past house boats, banana trees and tough nipa-type palms to a new stone bridge to Rong Gui Fong. The river becomes clogged with water hyacinth which has to be cleared periodically. Either way from the new bridge we reach the approach path to the village. The path was bordered by three kinds of planted Bauhinia (Variagata) trees (flowering in Dec to March) but these were upturned by the typhoon in Aug 2017. The path leads to a To Tei Gung statue shrine beside a banyan tree and to the village archway entrance (Pai Fong).

The village name in Cantonese is Wing Gwai Fong and it may be translated as Glorious, Fortunate Fong Village. The village belongs to the Fang (Fong) clan. Some emigrated to SE Asia, Canada, USA and HK for their livings. Some returned or sent remittances to build their homes. The village was attacked by Guans in 1928 and much damage was done. Most of the existing houses post-date that incident. Some overseas villagers returned to rebuild their village, particularly in the 1930’s, the latest in 1937, and the architecture reflects the period with three bay, two corridor homes in a diaolou/lu or modern villa style. The village was originally named Qi Long Ma but was renamed when it was rebuilt in the 1930’s. 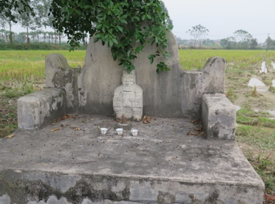 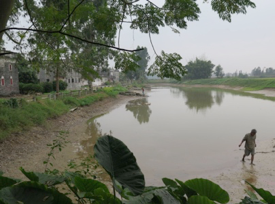 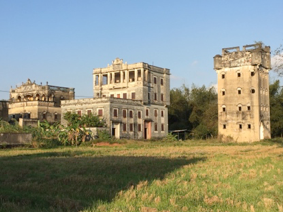 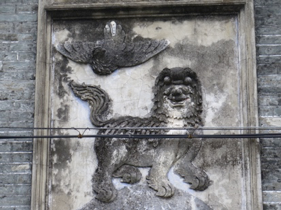 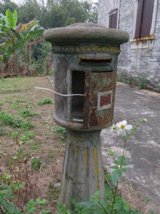 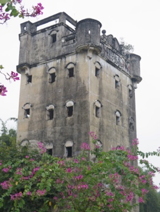 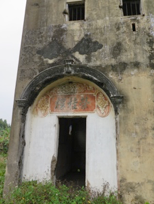 At the village, the Rong Gui Fang Tourism Zone, an entrance fee of RMB 30 was charged from 2013, but the investment failed, no-one collects the fee any more and there are salutary lessons here about some forms of conservation. To the left of the entrance arch there were bird nets to catch “Wo fa jeuk”, “ Yellow breasted bunting”, but these were poorly attended and were removed at the end of 2016. By the arch is a village well, a grinding stone and a stone chess board, all becoming rapidly overgrown if not tended. On the left Artemisia grows abundantly among the rice paddy in the dry winter.

The villagers provided a folk museum with descriptions in Chinese in one of the houses in the front row beside the pond, but this is usually padlocked.
The village now features traditional 3 bay, 2 corridor style houses, diaolou style, lu style and modern villa style houses, all of the 1930’s period. Some of the houses have fine exterior stucco work of lions (or Qilin, the mythical, hooved Chinese equivalent) and other decoration and several have paintings above their doorways, either of traditional Chinese themes or of the “western Utopia” or a fusion of both. There is a traditional fung shui pond along the length of the village that rears fish for market and is drained annually and disinfected with lime sprinkled on the exposed mud. Old villagers tend the vegetable plots.
At the back of the village is a fine deserted mansion in good structural condition, with terrazzo decoration, and a lintel indicating it was built in the 26th year of the Republican period, i.e. 1937. 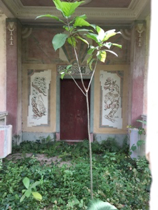 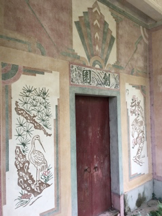 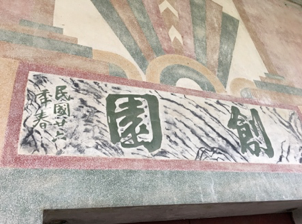 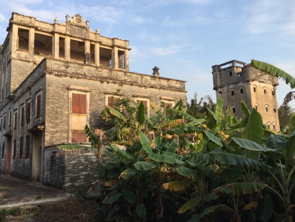 At the far end of the village there is a dilapidated post box beside the fine, large, old, deserted Post Office building. The Post Office was used for five 2-month training sessions for postal workers in 1964. Just before this, on the right hand side a splendid mansion belonged to a Kuomintang general. We can enter through either of the side doors and see the 3 bay, 2 kitchen and corridor design, the painted earth god shrine and the sky–lights or light wells (tian jing). There is also the traditional earth god shrine painting at one side and the kitchen or stove god painting at the other.

Next to the Post office is a building with the door calligraphy “ If a man does good things, he will get help (from God)”. Above are the characters “Yung gwei Lau”.

Opposite this we can enter a dilapidated 2 storey mansion built in reinforced concrete in the 3 bays –two corridors style, with ceiling openings, and shrine paintings at both ends of the central bay for the kitchen god and the earth god.

Just beyond the post office building, at the edge of the village is the diaolou, still coated with traces of light blue paint. Above the doorway in stucco relief are the twin Republican flags. At the ground floor is a board describing the life of Fong Bai-liang who was an engineer for the USA railroads and had studied at Yale. He had been one of the 30 students (25 from Guangdong, 3 from Jiangsu and 1 from Fujian), who followed after Yung Wing. Another board describes his son, a banker.

Upstairs we find some intriguing graffiti. A calendar with the heading “The year of our Lord, 1942” with the dates crossed out until 9 August 1942. A comment “Reached home 24th day of JAN. from Kowloon (started on the 14th), the name Gene Andrw (sic) Fong W, Feb 1942, and “2nd August 1946, go to Hong Kong, Happy Victory, M. at Y..me”. There is also some graffiti in Chinese, including a poem famous from the Song Dynasty. Another graffiti on the third floor relates about a woman fighter who had killed an invader who had held up the people in the village. 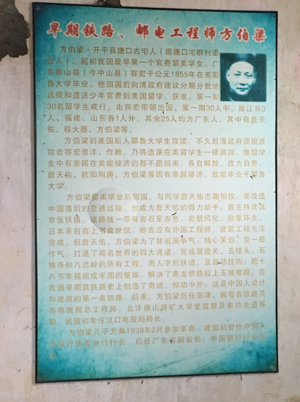 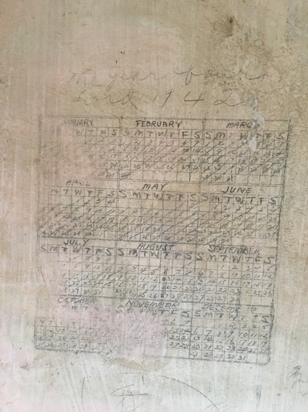 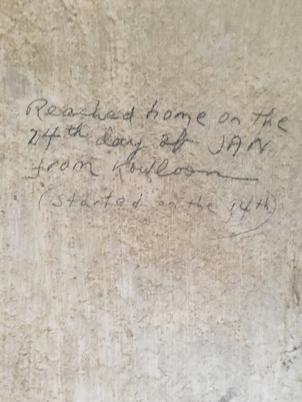 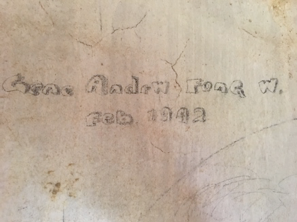 The balustrades at the roof are of green glaze, reminiscent of the Chinese Renaissance movement of the period. Some of the mansions have interesting paintings above their lintels reflecting the journey to the “western utopia” illustrating the ships used to reach overseas but set in a distinctly Chinese setting.

The D.O. reports a population of 39 in 7 families, but it is rare to see more than 2 or 3 villagers. The story of the old lady at the house with the new aluminium windows, fronting on to the fung shui pond may be illuminating. Her husband works and lives in Kaiping. Her son is in Shanghai. She went to Shanghai when he had a child but did not like the neighbour and came back as soon as she could. Her daughter is also in Kaiping. She rarely goes to Kaiping but does come to Tangkou at least weekly for the market (to buy and sell). The photos above her mantelpiece are of her father and mother –in –law.

If walking from Tangkou towards Rong Gui Fang, one can turn right at the new stone bridge to reach Tin Sam Cun. Alternatively, beyond the Rong Gui Fang diaolou is a new concrete road that leads to the G325 Expressway. Turning right off the new road we go past a factory and come to the village of Tin Sam Tsuen. This has three diaolou and a Pai Fong archway at both ends of the village. The farther diaolou is decorated with two painted crossed flags, one the Republican flag as used from 1928 till the present and the other, the first flag of the Republic of china, in red, yellow, blue, white and black bands. This was widely flown from 1912 till 1928 and even before the Republic of China in Shanghai and eastern parts of north China. The stripes represent red for Han Chinese, yellow for Manchus, blue for Mongols, white for Hui and black for Tibetans. (A Buddhist flag would have red, yellow, blue, white and orange colours). 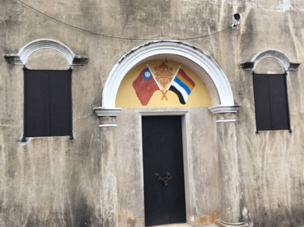 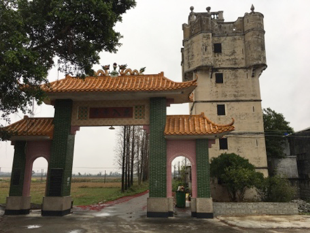 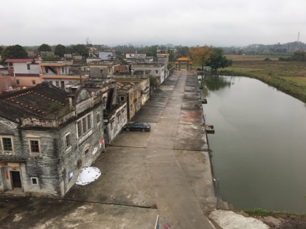