Coming out of the Factory Hostel and turning left a hundred metres we come to the “Pai fong” or archway of the Sangyuan Village, on the left. This is a Fong village. The village has three diaolou. The first we come to has been converted in to a “library”, though it contains no books. Inside are mahjong tables, table tennis tables and a ground floor communal room with a large television.  In front of it are old communal woks. Next door is a derelict ancestral hall and next to this is a communal hall/government office. Opposite, across the rice drying area, is an earth god shrine beside a banyan tree and opposite a factory. 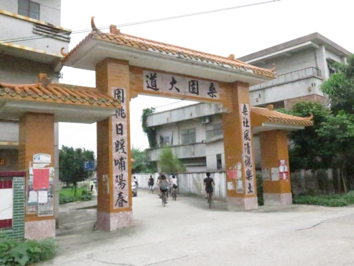 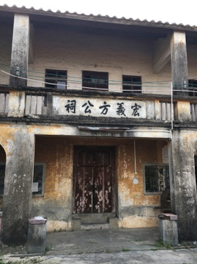 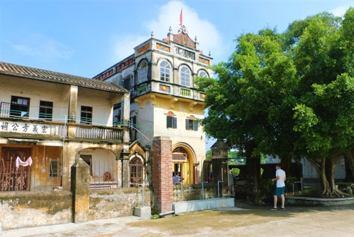 Deeper in the village, along the second alleyway, there is a second diaolou. Outside is a well with the marking 21.5.28 suggesting it was constructed in 1928, (though the year may be of the Republican era, i.e. +11). Under the upper balcony there remains clear indications that the diaolou was once covered in light blue paint. From its roof are good views back to the mast at the Tangkou Hostel and to the Fang Watchtower. 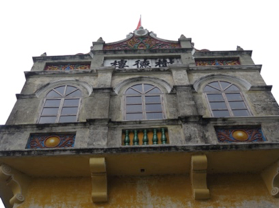 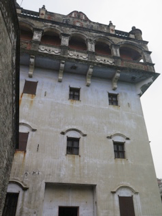 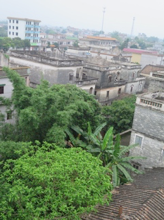 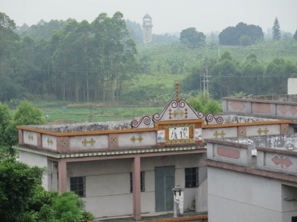 The “conversion” of the outer watchtower to a library was carried out using funds given by Johnny K.H. Fong. Sangyuan is Johnny Fong’s home village, though he himself originated in Hong Kong. He has lived in Canada since the early 1980’s, in Burnaby, West Vancouver, B.C. He is President of JvT Holdings and Chairman of Canasia Toys and Gifts Inc. He is an importer and distributor of consumer products, and is involved in real estate investments. He is effectively a broker, what the British and Dutch might have called a Capitan, a crucial role in their colonies for dealing between overseas affairs and natives.

He is a philanthropist giving to cancer research and health care, to B.C.’s Children’s Hospital, the Chinese Cultural Centre and SUCCESS. The latter is a Social Services Agency founded in 1973 in B.C. providing Social and Housing Services in Settlement, Employment, Parenting, Language training, Information Technology Training, Family and Youth. He is a community leader in the Chinatown Merchants Association (BCMA), an association supporting developers in building new condos. He co-chaired the Chinese Community Kamloops Forest Fire Relief Campaign following the disastrous 2003 fire. His father remarried locally. Fong is pictured below receiving a BC Community Achievement Award. 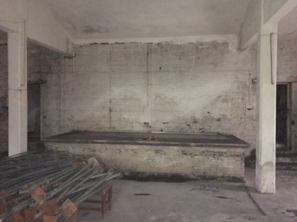 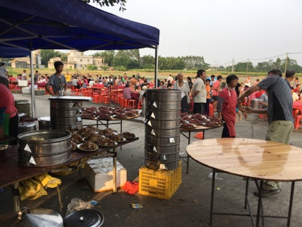 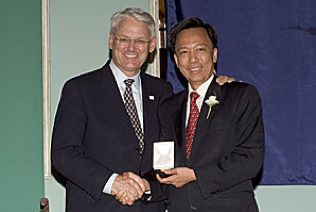 The clan has a celebratory gathering and dinner on the 6th day of the Chinese New Year and other gatherings to celebrate birthdays or the return of some eminent overseas clansman. One such is Michael Fong who now lives in Los Angeles and works with AT&T. His story is not untypical. His wife had family in Los Angeles and sponsored him to go there. He has a brother and an aunt who had settled in Vancouver, joined by his mother who is now in her 70’s and his father who is 84.

It was his great, great grand-father who first made the trans-pacific crossing to work on the American railroads. Michael returns to his home village each couple of years.

The clan owns around 450 mao (30 ha.) of land around the village which they farm predominantly with rice but also with some cash crops (e.g. taro). The government is planning to build a highway in the region from Rong Gui Fong to the south of the village and is requiring the village to return some 150 mao of land to government. They are proposing to compensate the village with RMB 40,000 per mao and it will be the responsibility of the Village Headman to ensure this is distributed equitably to those with a claim on it.

Ah Git work as an Intern with the Tangkou Community Project occasionally since  December 2017. He is a resident of Sang Yuan and had a grand wedding celebration in his home village in Nov 2018. 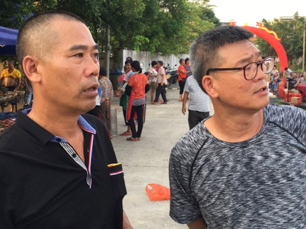 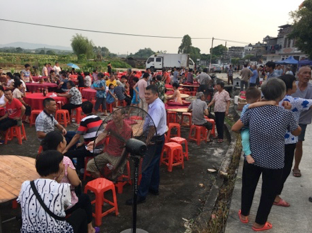 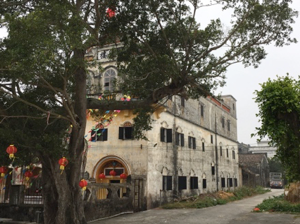 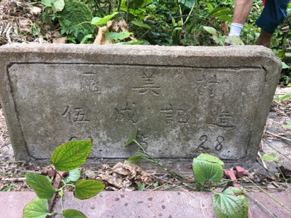 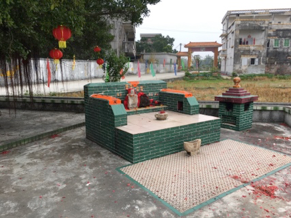 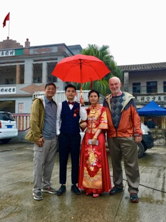