This is an administrative concept of the District Office in Tangkou Town. They are all Fong clan villages. All have Clan gatherings on the 6th day of the Chinese New Year.

The D.O reports 551 residents and 140 families have abode in the village.

The D.O. reports 490 residents and 125 families have abode in the village.

The D.O. report shows 229 residents and 51 families have abode in the village.

The village is coupled administratively with Wu Fu Cun (Ng Fuk Tsuen) that has a reported 21 residents and 4 families.

It has an interesting diaolou, with wall drawings and calligraphy. Villagers tell us these were done probably at the time of the Cultural Revolution when Red Guards were camping in the diaolou awaiting orders of what to do next. The more dramatic drawing is of “The White Haired Girl”.

The opera was first performed in 1945 in Yan’an, the Communists’ revolutionary base in northwestern China, inspired by Mao’s precepts for revolutionary art and literature as he  delivered them at a landmark forum in 1942. Mao Zedong was said to have been well pleased when he watched an early performance.

The story centres on Xi’er, a young peasant woman in a north Chinese village, whose family is persecuted by a brutal landlord who drags her away to serve as his slave and concubine. She eventually escapes to the hills, and for years, she finds shelter in a cave, where her hair turns white, giving rise to the local belief that she is a ghost. Her fiancé, Wang Dachun, who has joined the Communist forces, returns and decides to look for her. He finds her in her cave, and they rejoice in a future together under revolutionary liberation. “The White-Haired Girl” was also adapted as a ballet during the Cultural Revolution.

President Xi Jin-ping’s wife, Peng Liyuan, performed the lead role in “The White-Haired Girl” in the 1980’s and was an artistic director for a new production in 2015, according to the Ministry of Culture. The Ministry of Culture said it had revived the play recently in response to Mr. Xi’s landmark speech in 2014 on the role of the arts in China, when he advocated politically wholesome art cleansed of decadence. 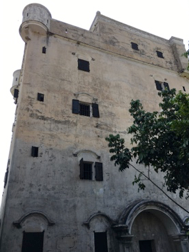 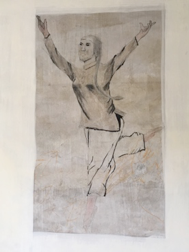 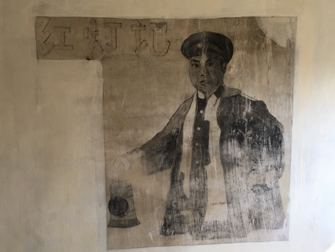 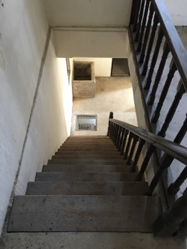 The other drawing depicts “The Legend of the Red Lantern” (hóng dēng jì). This is another of the Eight Model Plays, (yangbanxi) the only operas and ballets permitted during the Cultural Revolution. These were produced under the guidance of Jiang Qing, the wife of Chairman Mao.

The play is based on a movie titled There Will be Followers made in 1963, which is based a novel titled There Will be Followers of Revolution by Qian Daoyuan, first published in 1958. The novel in turn, is based on a true story of communist undercover agents working at a Huicui railway station in Hulin, Heilongjiang Province, fighting the Japanese invaders during the Second Sino-Japanese War.

When Li Yuhe, a railroad worker who was engaging in underground work, was taken away by special agents and Grandma Li has a premonition of being arrested, Grandma tells the protagonist, Li Tiemei the true story about her family. Grandma Li tells Li Tiemei how her parents have sacrificed their lives in the revolutionary struggle. Li Yuhe has taken up the unfulfilled task of the martyrs. After hearing the heroic story about her family, Li Tiemei is determined to follow the example of her father and carry the revolution through to the end. All three of the young women protagonists in the story express "extreme anger and hatred toward their enemies," along with "a fierce determination to join the revolutionary force." These emotions intensified through the course of the opera as the music and singing became more and more passionate.

There are also several panels of revolutionary writings on the interior walls of the diaolou. There is a fine view of the village and of Tangkou Tsuen and one of its diaolou from the roof. 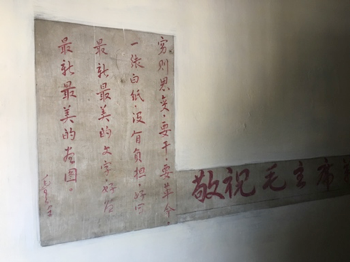 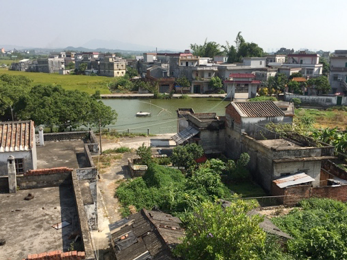 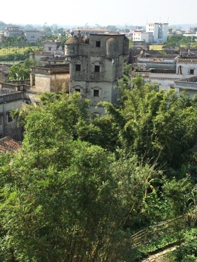 Beside the pond is an earth god shrine where village folk meet beneath a banyan tree. At both ends of the village are arches and at the far end is the modern ancestral hall (“Dung liu”, a more modern term for “Chi tohng”). 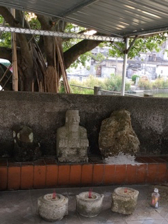 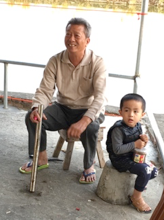 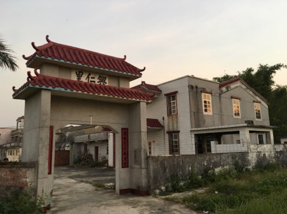 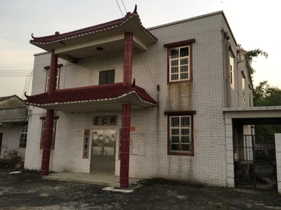 The D.O. reports 113 residents and 30 families have abode in the village.

This village has a broken diaolou. The owner ran into debt and solved the problem by selling off material from the diaolou. 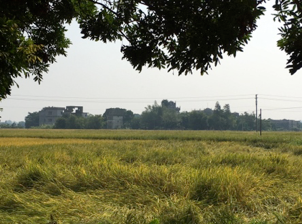 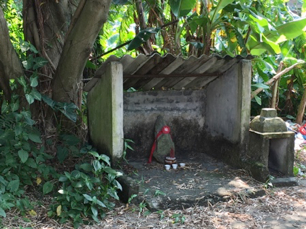 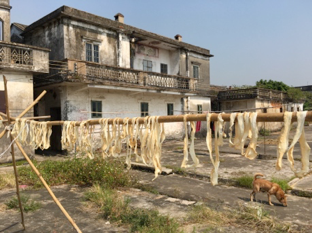 The D.O. reports 161 residents and 40 families have abode in the village.

The village is rich in fine old mansions. We met the village headman. 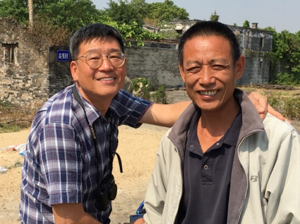 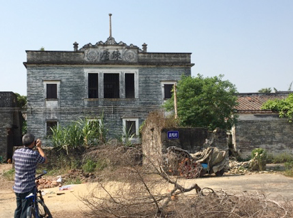 It has three locked diaolou. The houses have decorations and lintel paintings. 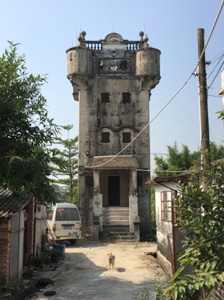 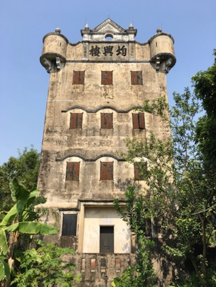 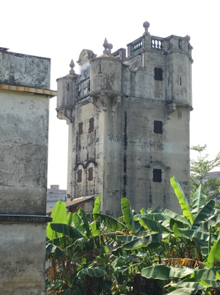 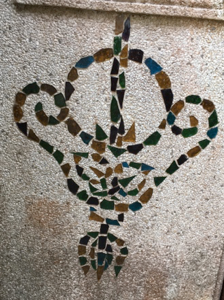 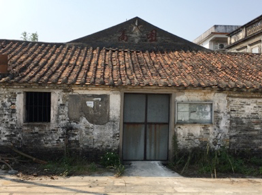 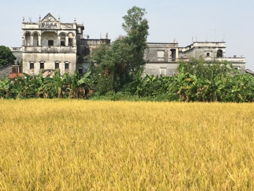 The D.O. reports 60 residents and 12 families have abode in the village.

The D.O. reports 39 residents and 7 families have abode in the village.

Note : Ngau Wu Leih, the Wild Goose Village beside the Factory Hostel does not feature as such in this listing.

Cycling out through old Tangkou town about 3 kms. we come to a T junction. Turning left we soon come to a junction where we can turn right into Dak Tohng Lei village. It has a Pai fong arch at the entrance. This is a Chan clan village, reputed to be some 600 years old. At the courtyard there is a granite block carved with the name “ Yin Sum Chan Gung Chi” telling us it comes from the old Ancestral Hall where Mr. Chan Yin-sum was venerated.

Beside this is a heavy stone weight. This was used by very fit men in Kung Fu training.

Following the path we pass several graves on the right above the village and its fields. To the right are an old ancestral hall, a temple, a community eating hall and two diaolou. 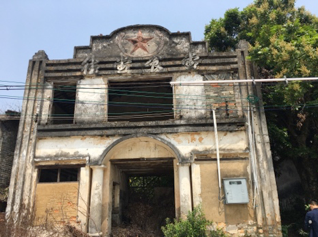 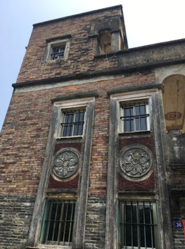 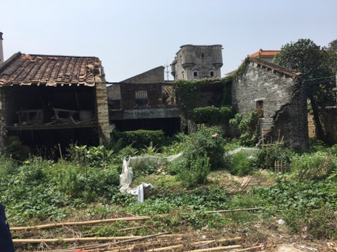 The village also has a tunnel excavated by the villagers during the anti- Japanese war and inside are carved some Maoist slogans.